Ashton Godwin, Legislative Liaison with the N.C. Wildlife Resources Commission (NCWRC), spent a day away from his Raleigh office touring water access sites located along a planned regional pedestrian trail in Burke County. Rep Hugh Blackwell had several meetings in Raleigh with Godwin to discuss to discuss potential trailhead sites for the Burke River Trail (BRT), but Blackwell thought it was advantageous for Godwin to visit Burke County with him to get a first-hand look. 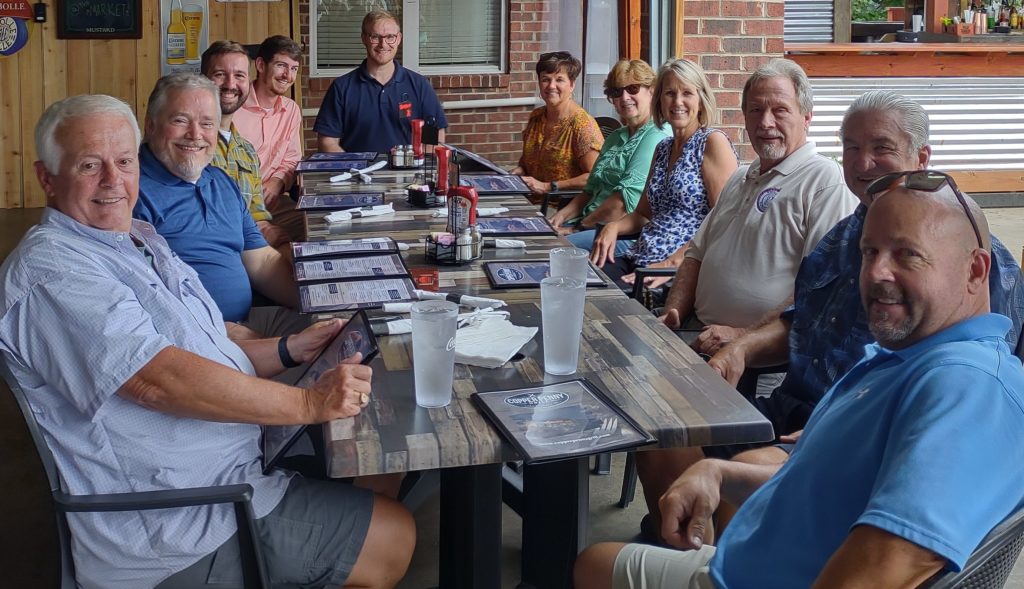 Weaver Lane Boat Ramp in the eastern part of the county was the first stop. Rhodhiss Town Manager Rick Justice, Mayor Allen Spencer and Councilman Mike Phillips welcomed Godwin and other stakeholders. Justice shared his vision for the 131-acre property to host camping, picnicking and trails – including the BRT. Because the property is owned by Duke Energy, managed by NCWRC as a motorized boat ramp, and is in Burke County’s jurisdiction it was critical for representatives from each entity to be present for the discussion. Alan Glines, Burke County Community Development Director & Deputy County Manager regarded the meeting as “a beginning step to view opportunities for regional recreation facilities in eastern Burke County along with potential partnerships with State and local stakeholders.” Parks Director Treg McGee took part in the site visit and shared “there was a Burke County plan from about 15 years ago that looked at this exact recreational use, but the economy at the time did not allow it.”

Dialogue continued at the Rhodhiss location of the Copper Penny Restaurant which is also along the BRT corridor. A key topic centered on the future of the Burke County Convenience Center parcel that is adjacent to the Weaver Lane Boat Ramp tract. After the Rhodhiss Road center is relocated to Highway 70 in Icard, the 44-acre site will be empty. Further research is needed to learn what is possible from a health and safety standpoint on the former landfill property. The hope is that the property could be become part of the recreation plan.

Traveling west, NCWRC and Duke Energy stopped at Valdese Lakeside Park to meet with Valdese Mayor Charles Watts, Manager Seth Eckard, Parks and Recreation Director David Andersen. NCWRC has designed a combination fishing pier kayak launch for the park. Andersen, who is the town liaison with NCWRC noted, “We have a lot of visitors at Valdese Lakeside Park, and these amenities would certainly bring more people to see what a great asset we have. We regularly hear from our visitors that they would love to have a place to fish or to more easily access the water.” Cayce Brennan with Duke Energy’s Lake Services handles pier permitting requests and explained the process to the group. Once Duke has accepted the complete application, which includes permissions from several environmental agencies, it will require Federal Energy Regulatory Commission (FERC) approval. All agencies are working as quickly as possible to get this fishing pier and kayak launch ready for Valdese. Mayor Watts expressed his appreciation to Duke and NCWRC for their efforts sharing his strategy, “We continue to add new amenities to our Town that will be beneficial to our citizens and pull in newcomers who want to make Valdese their home.” 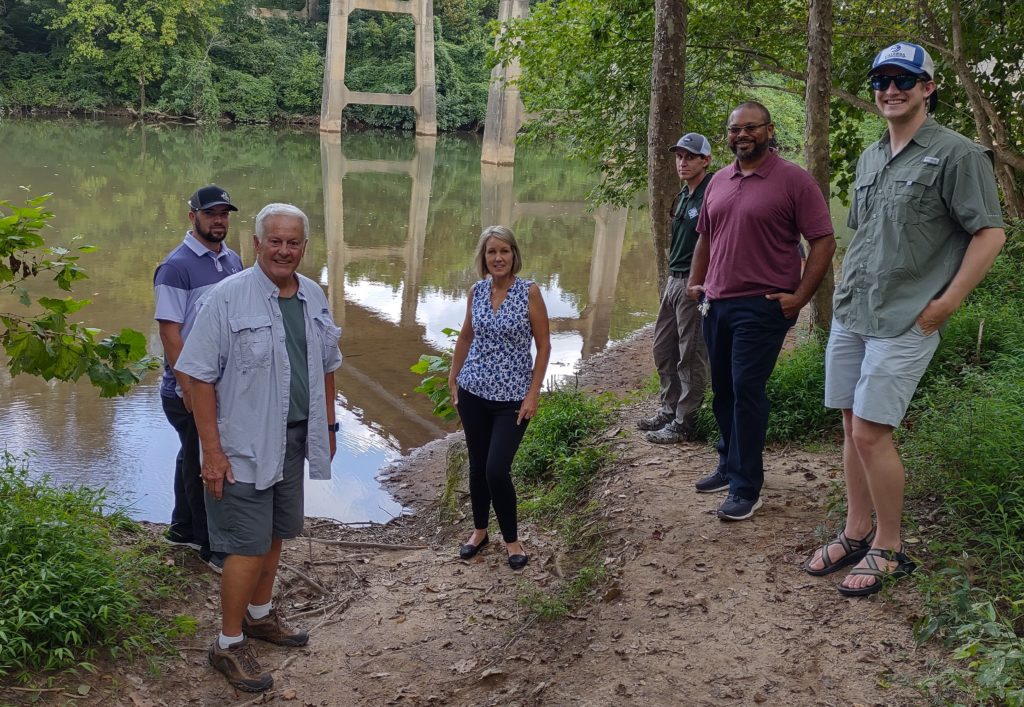 The final site for the day was Rocky Ford Access in Morganton. The gravel parking lot found at the end of the Morganton Greenway, also designated Fonta Flora State Trail, is where the BRT will begin. NCWRC visited the location a few weeks ago to determine the feasibility of a fishing pier. At that same meeting, a representative from NCDOT verified the BRT could continue under the US-64 and NC-18 bridges. The goal for the access is better parking, restrooms, boat access, fishing pier, and extension of the Morganton Greenway via the BRT. Extending the Morganton Greenway to Riverview Apartments was in the original greenway plan many years ago.

Standing at what will be the western terminus of the BRT, Representative Blackwell shared the trail objective, “In addition to providing a healthy lifestyle to citizens, the Burke River Trail will have a positive economic impact to the towns through tourism, and those wanting to move to an area with trails and outdoor activities.”

The McGalliard Creek Bridge installation creates the first two miles of Burke River Trail. A section close by will be on the ground within the next year. The Burke County Public School Board voted at the August Meeting to allow the BRT to cross their property located north of Draughn High School. The Town of Valdese will hold the trail easement allowing the connection to Valdese Lakeside Park. The trail will follow Hoyle Creek and Lake Rhodhiss to reach a proposed housing development called Valdese Bluffs. 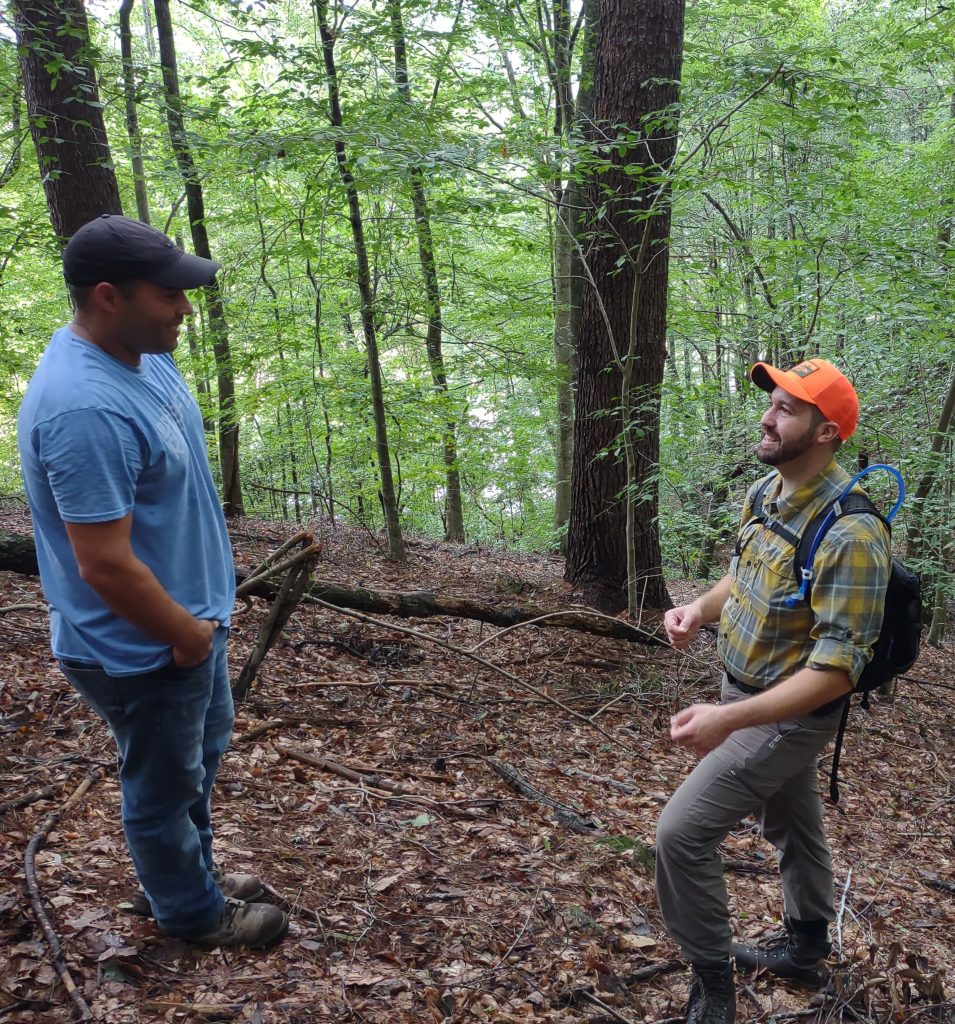 Vulcan Materials Company in Morganton has property along the river trail corridor that is in the county’s jurisdiction. Steve Jetter, WNC Area Operations Manager for Vulcan, accompanied Shane Prisby, Burke County Community Development Operations Manager and Beth Heile, BRT Coordinator for a walk on the Vulcan property. The goal was to verify there is room for the trail and still be a safe distance from Vulcan’s operations. The walk was educational for all as Prisby shared trail design strategies with the group while Jetter shared best practices for quarries.

For the Vulcan segment of the BRT, Vulcan will continue their commitment to education by placing several exhibits along the trail for users to learn about how rocks and minerals are used in society. “We are excited about this opportunity to partner with the Burke River Trail stakeholders by offering part of our buffer land along the river for the trail segment.” remarked Denise Hallett, Vulcan Community and Government Relations Manager.

Heile is under contract with Western Piedmont Council of Governments to serve as the Burke River Trail coordinator to narrow down the route, obtain easements and get trail on the ground. “Having grown up in eastern Burke County and attended East Burke High School, I am thrilled to be working on a regional trail that will showcase the what the small communities in eastern Burke County have to offer,” Heile said of her new position.

The 20-mile Burke River Trail will follow the south side of the Catawba River, dipping down to the small towns of eastern Burke County. The hiking and biking trail will be a mix of natural surface, crushed cinder and paved as it wanders along the river banks and into downtowns.

To learn more about the Burke River Trail, there will be a drop in public input session on Tuesday September 13, 4-6 pm at Rutherford College Town Hall at 980 Malcolm Blvd. Heile with be there with maps and handouts to answer any questions and take suggestions.